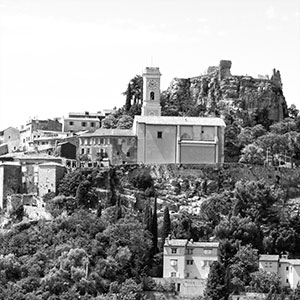 Eze is one of my very favorite French villages. It lies just a few short kilometers outside of Nice and I have visited it on a variety of occasions. It was the first “village perché” (perched village) I ever found in France and it just totally blew me away with its small, narrow, winding, steep stone streets and pathways. Carole and I first visited Eze in the mid 1990s on one of our trips to MIDEM. We took the bus from Nice and spent an afternoon exploring the little town. Since then I’ve climbed up to it via bike many times over the years, both on my own and with friends. Perched on a steep cliff high above the Mediterranean, it’s one of the best examples of a small French village built at the top of a small peak for safety and security in the middle ages. I spent a day in June 2013 walking through the village and taking photographs, some of which are displayed here. [Click on any image to view a larger version and to cycle through the gallery.]

The entrance to Eze.

The climb up to Eze.

Sign at Eze de Bord for the Chemin Nietzsche.

The church at Eze.

Eze from a small distance east.

Directions to the church (eglise) in Eze.

Steps and doorway in Eze.

The beginning of the Chemin de Nietzsche in Eze Bord de Mer.

The Chateau Eza Hotel in Eze.

Flowers and doorway in Eze.

Sign leading to the Chemin de Nietzsche in Eze.

A statue near the church in Eze.